What follows is almost certainly too much information, but since you asked (and since I've been doing all of this research) I thought I'd send you this in case you're interested.

My father passed away on January 15th at age 85 from complications of Alzheimer's disease. His memory had been slipping away for about the last 12 years, so it was not possible for me to ask him what happened during the war. And, of course, like so many veterans of WWII, he almost never spoke about it.


Since he died, I have been looking through his scrapbooks and a collection of photos he left in an effort to piece together what he did during those years. I’ve looked on the internet to research his Army unit’s history and found some good information. Also, I’m fortunate that my cousin, a U.S.Air Force Colonel, did an interview with my father in 1990 and asked him about the details of his time in the Army. I’ve also spoken to some of his Army friends, and from all of this, I believe I have most of the information I was trying to find. Some of the details are still a little sketchy, but I believe what follows to be accurate.


My father was born on January 1, 1923 in Philadelphia, Pennsylvania, the second of his parent's seven children. He enlisted in the Army at age 17 and was assigned to the 5th Combat Engineers/1278th “C” Company and had Basic Training at Fort Belvoir, Virginia. After this, he spent 26 months in Iceland training in various Combat Engineering specialties including bridge building, demolition and mine and booby trap neutralization. The 1278th were also trained as infantry as they would often be called to engage in combat without the support of regular infantry units.


From there my Father's Company was sent to England where they prepared for the D-Day invasion. They were actually in the boats on June 6th D-Day, but they couldn't leave because of heavy seas. They eventually arrived in an LCT boat on Utah beach June 26th, went through France clearing mines and booby traps, building bridges, then into Holland where they rebuilt the 603-foot bridge over the Meuse River at Maastricht in only 11 days (to this day still the U.S. Army record-time for a class 70 bridge of the length). From there they moved down through Liege, Malmedy, Bastogne to Martelange.

My father's Company was ordered to attack and clear the German forces in Martelange to allow for General Patton’s advance to relieve General McAuliffe’s 101st Airborne at Bastogne about 13 miles to the north of Martelange. The 1278th went into town on December 21st and were ambushed by elements of the German paratroops of the 5th Fallschirmjager Division under the command of Luftwaffe Generalmajor Ludwig Heilmann as well as elements of a Panzer Division.


The 1276th and another U.S. Engineer unit (299th), approached Martelange on trucks around 3AM and waited outside the town until they attacked at 8 AM. My father’s “C” Company went in first, right down the middle of town. (That's the shot of the road into town I have attached below.). A Company from the 299th Combat Engineers was right across the river also working their way toward the center of the town. When "C" Company arrived at a "T" intersection at the center of town they saw a hotel and some other structures just across a blown bridge. They heard a man at the hotel shouting something they couldn't understand. When they moved forward the see what was going on, the Germans started shooting with 20mm cannons, machine guns and the usual assortment of rifles and mortars.


As soon as this happened Captain Sullivan, commanding “C” Company, called for a machine gun to go the front of the column, right at the base of the blown bridge. My father was on the .50 caliber Browning M2HB along with a crew of three other soldiers. My father carried the gun forward; his ammunition carrier was hit on the way up. After the gun was set up, my dad started shooting back. Not long after this the barrel burned out. My father starter to replace it with a spare he was carrying when a German soldier ran from a building approximately 20 feet in front of him and shot him with a burp gun. One bullet grazed his right calf, a second hit him in the right hip. My dad said the second bullet picked him up and threw him 10 feet through the air! He landed face down and the other two guys picked him up and pulled him back to cover. A moment after this a mortar round scored a direct hit on their abandoned machine gun. At some point a young girl ran out and placed a small Crucifix on my father's jacket as he lay wounded in the street. I still have it today.


According to the 1278th's official Combat Report, this battle lasted about two hours. There were many casualties on both sides. Between the 1278th and the 299th there were approximately eight dead, 10 wounded, 15 or more missing or captured. The Germans also circled around the back and captured the trucks they came in on. One of the captured was my dad's good friend, Sgt. Bill Zion. I spoke to Bill about this and he told me he was taken as a POW along with a few others.

In the interview my dad gave to my cousin, he kept referring to a massacre of, I believe, 40 American POWs in a lumberyard that day. On the map of Martelange he drew there is a lumber mill near the area of the battle. He said the Germans "just lined them up and shot them." I don't believe he was confusing this with the Malmady Massacre--it seem like it was a completely different event. He told my cousin it was "guys from the other Company", implying they were his friends or at least they were guys he knew. He had a very difficult time talking about this--he got very emotional, even all those years later. I'm still trying to research this--seems like there has to be information on it somewhere.


After he was shot, my dad said that he and about 18 other wounded went back a few hundred yards and crossed a railroad bridge to get over the river, then went through the woods to try and get back to the trucks they had come in on. He and a sergeant were at the front of the group. My dad couldn't walk too well at this point, but there were a lot more seriously wounded (some needed to be carried) so he went to the front of the line. He said the weather was very overcast and the forest was extremely dark.


The group heard something ahead of them and my father and this sergeant went to see what it was. My father climbed up an embankment to an opening in the forest. He looked out and saw seven German tanks and a group of supporting infantry stopped in what looked like a roundabout/traffic circle. There were three German officers 20-30 feet in front of him, their backs were turned towards him. He said the guy in the middle appeared to in charge. The other two officers were on either side of this guy telling him something. My father said he just went absolutely stone cold--just froze in his tracks. He said the only thing that kept him from being discovered was all the noise coming from the tanks' engines.


He climbed back down the embankment and told the other guys they'd have to find another route. Not long after that they saw a man walking through the forest right towards them. He was with the Belgian Underground and led them to a schoolhouse where they waited while the Underground sent word to the U.S. soldiers who eventually came and picked them up at dusk.


The next day the Germans pulled out of Martelange, which was exactly what the Combat Engineers were trying to make happen. The German commander Heilman, who was interviewed about this after the war, said they never expected that much resistance since they knew the U.S. troop strength there were minimal--not much more than a bunch of infantry and Combat Engineers. What could possibly go wrong? In the end, the Engineers’ attack left the road open for Patton to get to the 101st Airborne trapped at Bastogne. My dad’s friend Pvt. Ed Podsczski said Patton came right through there on his tank and said he wanted to kiss those guys for what they did! (Strangely enough, General George Patton was born and raised in my present hometown, San Marino, California; Patton's father was San Marino's first Mayor.)

After a short stay at a field hospital near Martelange, my father was moved to a hospital in Paris for a week, then back to England to recover. He was offered the chance to go back to the States, but declined. He wanted to get back with his friends and finish the job. Five weeks later, he was back with his Company on the Continent and eventually went into Germany where he finished his service.


Here is a link with more information about the 1278th and the action at Martelange: http://www.criba.be/index.php?option=com_content&task=view&id=329&Itemid=41

Anyway, thanks for reading this. Hope it wasn't too long. 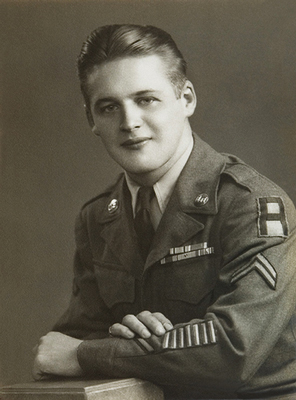 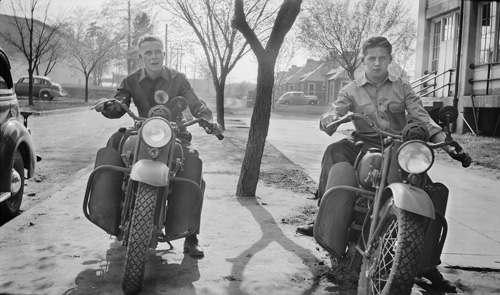 My dad on the right at Boot Camp, Fort Belvior, Virginia, April, 1940. 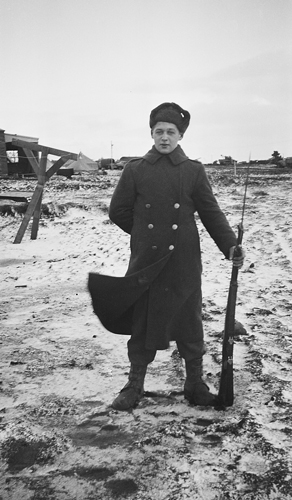 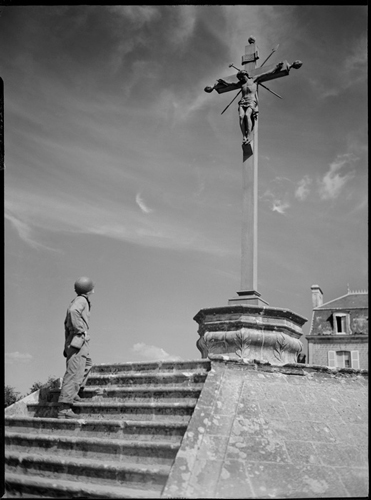 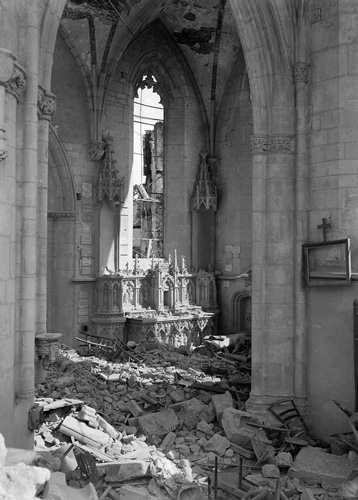 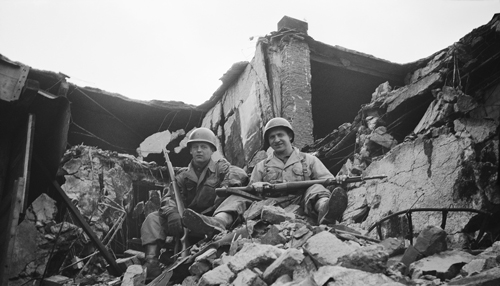 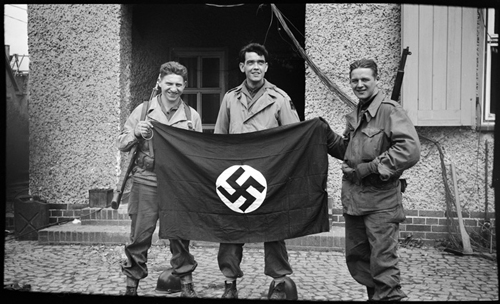 Dad on the right, location unknown, 1944. He brought this flag back after the war. 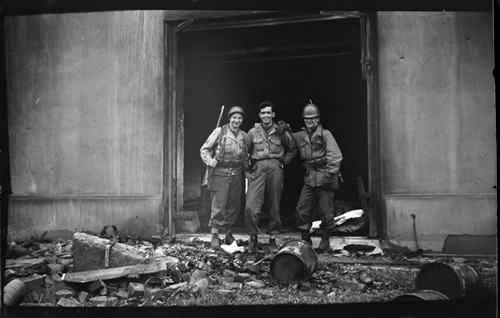 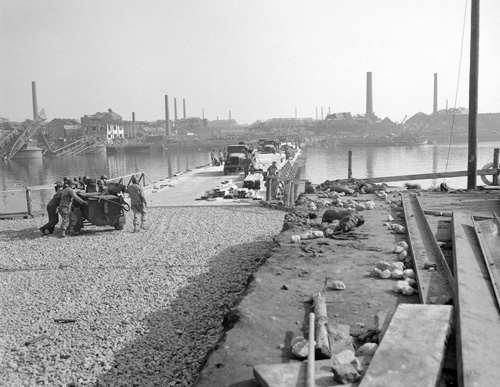 5th Combat Engineers build a 603-foot, Class 70 bridge across the Meuse River at Maastricht, Holland (completed in a record 11 days). 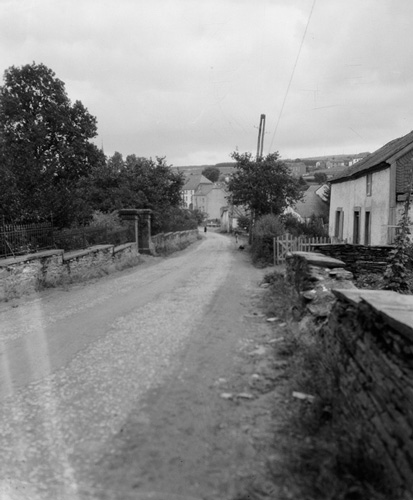 The road into Martelange, Belgium where my father was wounded on December 21st, 1944 during the Battle of the Bulge. 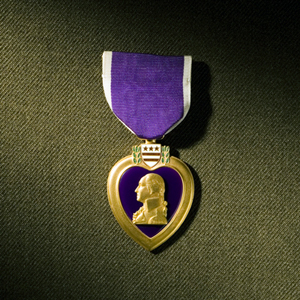 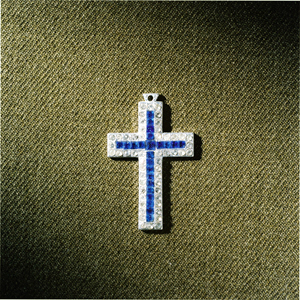 The Crucifix given to to my father by a young Belgian girl after he was wounded at Martelange. 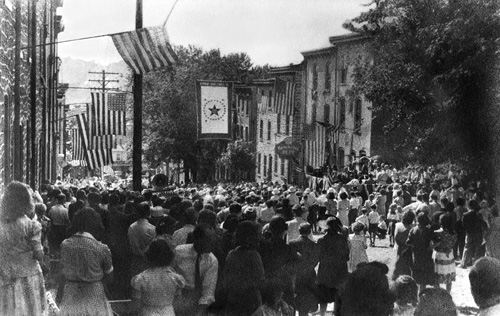 Parade (possibly VE Day) on my father's street in Philadelphia. The star flag is in front of his house. I believe this flag meant that the family there had someone in the service. 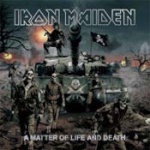 Here is a link with more information about the 1278th and the action at Martelange: http://www.criba.be/index.php?option=com_content&task=view&id=329&Itemid=41
Sincerely,

That's funny: the founder of the C.R.I.B.A. is one of our members, H. Rogister!

Here is a link with more information about the 1278th and the action at Martelange: http://www.criba.be/index.php?option=com_content&task=view&id=329&Itemid=41
Sincerely,

That's funny: the founder of the C.R.I.B.A. is one of our members, H. Rogister!