The 25th Infantry Division was formed on the first of October, 1941 at Schofield Barracks, HI. It is predated by the Hawaiian Division which defended Hawaii from 1921 to 1941. The division was first attacked on 7 December 1941 by the Japanese at Pearl Harbor. In retaliation, the 25th Infantry was ordered to the Solomon islands to fight off the Japanese Army. It was here that the division earned the nickname "Tropic Lightning" due to its large success. After the campaign in the Solomon Islands the Division took part in two more campaigns, one to liberate the Philippine Islands, and another to liberate the Island of Luzon. The Division fought for 165 days straight without rest. This information was taken from the official 25th Infantry History home page 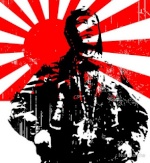