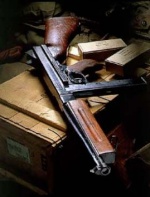 A. the REQUISITIONNED troops (forced men)- The "malgré nous", French men from Alsace and Lorraine integrated in the Heer and the Waffen SS as Volksdeutsche (140000 men).
- In the Todt organisation (150000 men)
- 25000 requisitionned civilians working on the docks and for maintenance of the Kriegsmarine installations
- many thousands workers in factories in Germany : POW and members of the STO (service du travail obligatoire = obligatory work service).

B. VOLUNTEERS for political reason (mainly to fight against bolchevism) in different organizations : (a total of about 45000 volunteer men in military uniform)

1) The LVF (= légion des volontaires français) = Französiches IR 638 (1941-1943).
6249 men engaged in this unit
It fought very well during the battle for Moscow (very high losses), then reconstitued and mainly issued to anti-partisans warfare.

3) NSKK Motorgruppe Luftwaffe (= Nationalsocialistische Kraftfahrkorps)
A Luftwaffe logictics unit (drivers, engineers)
2500 French men integrated since 21st July 1942 to form the 4th NSKK regiment.
NSKK Rgt 4 is first affected to the eastern front (Luftgau Rostov/Don) and then in the Balkans.
In 1943 it becomes NSKK Transport Brigade der Luftwaffe and is affected to France (logisctics on the V1 launching sites) and then in Italia.
Often integrated in Kampfgruppe against partisans.
Served also in Danmark, Hungary and finally Austria.

4) Legion Speer
about 500 French men, drivers for the Arbeitsamt

8 ) Waffen SS (officially 1943-1945 but before for individual engagements and Volksdeutsche volunteers (Alsace, Lorraine citizens), difficult to identify because they are not registered as French in the german archives.

400 volunteers of the Charlemagne were among the very last defenders of Berlin with remnants of the Nordland division.
This 400 volunteers detroyed officialy 62 russian tanks with Panzerfäuste in 1 week (92 tanks accordind to several books). At least 20 eiserne Kreuze and 4 Ritterkreuze had been earned in Berlin.

From the 400 men only 30 survived the battle. Several were executed by the Russians and later 4 by the Free French Forces of general Leclerc.

9) The Todt organization
about 2000 volunteers in the armed Schutzkommandos for the protection of the building sites. They also have been engaged in combat in Lettonia and Yugoslavia, probably against partisans.
10) The Technische Nothilfe (Teno)
? men

11) One Pionnier Bataillon (provisory)
No unit designation, probably organized to repair the bridges accross the Seine after allied bombings in 1944.
? men

12) Hitlerjugend supervision in summer camps.
KLV = Kinderlandverschickung in the camps of Langenargen, Bad Reichenhall and on the Konstanz lake.
? men and women

13) Flak units (1943-1944)
Vichy forces but under the german command to help because of the lack of Flak protection and the increasing air attacks.

2 AA artillery groups (401 and 402) each with 6 batteries with 12 French 25mm AA gun each.
The groups kept their French denominations.

14) Volontari Di Francia (1943 - 1944)
- In 1943 after the armistice signed between the allies and Badoglio, 150 French men with italian origins (mainly from Paris) joined the RSI of Mussoloni
In March 1944 : the Longobardo Bataillon is formed with these 150 man. They receive the same formation and training as the San Marco units.
Integrated in the Decima Flottiglia MAS in July 1944.
Forms the 3rd company of the Fulmine bataillon (mainly anti-partisan warfare on the Yugoslavian border where many Tito's partisans are infiltrating).
19th January 1945 they fight against 2000 Tito's Partisans : 1 week battle, 86 KIA and 56 WIA ... but the infiltration is blocked thanks to reinforcements (several POW are decapitated by the partisans).

- 3 French men : Louis Marie Maurice Zeller, François Munoz and Alfed Gross used by the Abwehr since 1943. Under the command of Maurice Zeller a Frontaufklärungstrupp is organized against the French maquis/SAS in Saint Marcel (See Part II about the French SAS units).
They captured 1 officier + 2 NCO of the 2nd RCP. Then thanks to these uniforms they gathered infos among the population and killed 7 other SAS (among them the commanding officer, Pierre Marienne) and 8 resistants. All 3 men have been executed the 17th july 1946.

- many special units depending from the Abwehr and later from the RSHA (Reichsicherheitshauptamt).
Albert Beugras aka "agent 30018" organized a spy network called "Atlas" in North Africa. Several of its members infiltrated the FFL forces that landed in Italia and Southern France.
Beugras directed also 6 sabotage schools during 1944 and 32 infiltration operations from Germany to France in late 1944. These infiltrations were conducted using allied captured planes (dakota, B17, B24). Classical airborne operations or using the PAG (Personen Abwerf Gerät), an airborne container with 3 men have been performed.
The allied planes were flown by KG200 and the "Olga" squadron.

95 men have been infiltrated but 86 were captured and 16 executed probably because a Free French spy was infiltrated in there !

16) Brandenburg Division
In 1943, 180 French men formed the 8th company of the 3rd Regiment. Often Engaged in Southern France, imitating resistants (with captured radios) they captured many equipments/weapons deliveries and proceeded to many arrestations.
This company has also been engaged against the resistant in the Vercors battle. They organized the glider attack usually said as being an SS attack but the French witnesses have probably taken the "Brandenburg" arm patch for a SS marking.

17) German police units (about 10000 men in uniform + about 30000 civilian auxiliaries, not counted)
- Sicherheitspolizei = Sipo (? men)
- Sicherheitsdienst = Sipo-SD (? men)
- Selbstschutzpolizei = SSP : selfprotection police created during spring 1943 by Standartenführer SS Hermann Bickler (a French man from Alsace) in order to infiltrate the resistant organizations and to protect the collaborationist movements. About 5000 men.
- The "Jen d'Eclache" group : 30 armed men formed in 1943 and operationnal in the Dauphiné area and in Grenoble
- The "mouvement anti-terroriste national" (in Lyon) : 150 men, formed in 1943 and attached to the Sipo-SD administration.
- In the city of Bordeaux, Friedrich Wilhelm Dohse managed to federate all the anti-communist movements against the resistance.
# the "Hauskapelle" (about 300 men formed by the French Brandenburg 8th Coy, created in 1944)
# Le Corps Franc Français (CFF) created in 1943, about 40 men
# La Phalange raciste, already existing end 1940.

+ not counted : the French Milicia from Darnand (Vichy government) but often used by the germans for military operations agaist the resistants.

17) French North Africans
They served in :
- Todt organization
- Bridade Nord Africaine (180 muslims Algerians that were used as guards in the Peugeot factories of Socheaux). Originally founded by Mohamed Al Maadi, a very religious man hating jews, who met the great Mufti of Jerusalem in Berlin. They executed at least 50 French workers and are responsible for many rapes and plunderings. Almost destroyed during combats against partisans.
- Deutsche-Arabische Legion (January 1943) that became Deutsche Arabische Lehrverbad and later 845. Bataillon der Wehrmacht (commander = Oberleutnant Meyer-Ricks). They served in Caucasus and against Tito's partisans?
- Sonderverband 287 (in Greece and Ukrainia) and 288 (In Tunisia), depending from the Abwehr and later integrated in the Wehrmacht as Panzergrenadier Regiment (mot.) "Afrika" (commander = Oberst Menton), in the 90. Leicht Division.