I need your help today ! 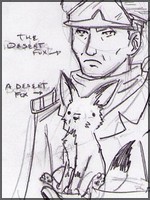 At about this time Rommel produced a startling plan: the
Wehrmacht’s young bachelor lieutenants should be brought in to
train the Hitler Youth. Schirach said he strongly doubted that
young army officers had nothing better to do with their free
weekends than drilling hordes of boys in how to stand at attention.
Rommel replied, “They will just be ordered to.” Schirach
fobbed him off. “Rommel was put out by this,” said Schirach. “He
then journeyed up and down the country a lot, speaking to my
Hitler Youth leaders. The content of his speeches was always the
same, how he had stormed Monte Mataiur. . . . Willing to hero
worship though they were, my more intelligent leaders took umbrage
and protested to me. Rommel, moreover, was propagating
some kind of premilitary education, which would have transformed
my Hitler Youth into some kind of junior Wehrmacht.”
Rommel himself virtually admitted as much in a private letter
to a general in August : “In my view postenlistment
training should be left mostly to those SA [Brownshirt] leaders
whose own service record shows they are well prepared for the
nation’s greatest testing time  by which I mean war.”
Schirach’s bitterness toward Rommel did not lessen. At a
gala theater performance he sat in the first row and put Rommel
in the second. Rommel pointedly moved forward into an empty
seat next to him, loudly announcing: “I represent the
Wehrmacht, and in this country the Wehrmacht comes first.”

The chief of the Wehrmacht’s national defense branch, Alfred
Jodl, sadly noted in his diary that Schirach was “trying to break
up the close cooperation initiated between the Wehrmacht and
the Hitler Youth by Colonel Rommel.”
Eventually, Schirach succeeded. But the clash with Hitler’s
favorite, Schirach, did not blight Rommel’s career. On the contrary,
he was suddenly selected to act as temporary commandant
of the Führer’s headquarters. At Munich on September  the
Great Powers had forced Czechoslovakia to cede to Germany the
disputed Sudeten border territories, and Hitler had decided to
tour the ancient German cities there. Rommel’s job would be to
command the military escort. For an ambitious officer, the posting
was a godsend  it catapulted him into the very highest company
overnight. [...]