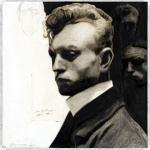 
Stanislaw Kozak, a Pole who participated in the building of Belzec, describes the first stages of construction:

"In October 1941, three SS men came to Belzec and requested from the municipality twenty men for work. The municipality allotted twenty workers, residents of Belzec, and I was among them .... We began the work on November 1, 1941.

We built barracks close to the side track of the railway.
One barrack, which was close to the railway section, was 50 meters long and 12.5 meters wide ....
The second barrack, 25 meters long and 12.5 meters wide, was for the Jews destined for the "baths."
Not far from this barrack we built a third barrack, 12 meters long and 8 meters wide. This barrack was divided into three chambers by a wooden wall, so that each chamber was 4 meters wide and 8 meters long. It was 2 meters high. The inside walls of this barrack were of double boards with a vacant space between them filled by us with sand. The walls inside the barracks were covered with pap. In addition, the ground and walls up to 1.10 meters were covered by sheet-metal. ...

Each chamber of this barrack had on its northern side a door 1.80 meters high and 1.10 meters wide. These doors, like those in the corridor, were covered with rubber. All the doors in this barrack could be opened from the outside only. These doors were built with strong boards 7.5 em in diameter and were secured ftom the outside with a wooden bar held by two iron hooks against pressure from inside the barrack. In each of the three chambers of this barrack a water pipe was installed 10 em above the floor. In addition, on the western wall in each chamber in the corner, was a water pipe 1 meter above the ground, with an open joint, turned toward the center of the room. These pipes with the joint were connected through the wall to a pipe that ran under the floor. In each of the three chambers of this barrack was installed an oven weighing 250 kg. It was expected that the pipe joint would later be connected with the oven. The oven was 1.10 meters high, 55 em wide and 55 em long ....

During the time that we Poles built the barracks, the "Blacks" [Ukrainians] erected the fences of the extermination camp, which were made of dense barbed wire. After we Poles had completed building the three above-mentioned barracks, the Germans dismissed us, on December 22, 1941. . . ." 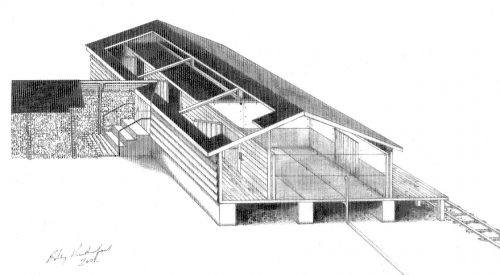